Family have come to Minnesota from Nebraska, Iowa, North Carolina, and California to celebrate the 90th birthday of my mom’s first cousin Dorothy. Tonight was the first of several group get-togethers that will culminate in a big bash Sunday afternoon.

A few days before she was born, the eighth Olympic games closed in Paris. Four days after she arrived, the comic strip “Little Orphan Annie” debuted. World War One had ended six years earlier and the stock market would set off the Great Depression five years later.

She’s one of the sweetest people you could ever meet, and it’s wonderful to see so many people coming from all over to celebrate her. She is loved and adored by so many.

Grandpa would have been 101 today. Happy birthday, Grandpa, wherever you may be. 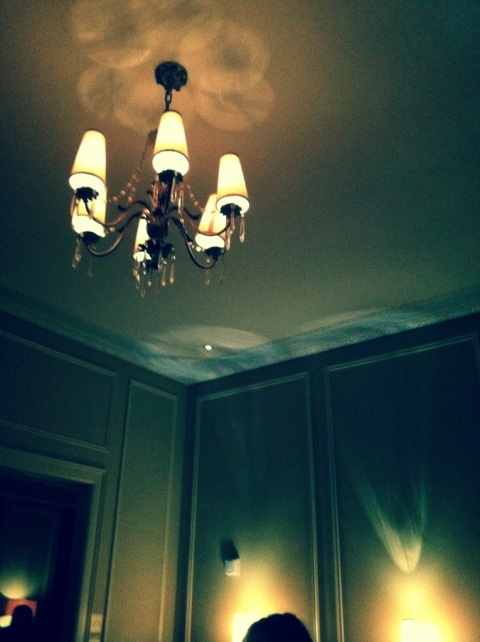 All epic. Each deserving of its own paragraph and photo gallery.

The St. Paul Art Crawl was primarily centered in the Lowertown area of the city, which boasts lovely old buildings and warehouses refurbished as artist lofts, condos, and office space. While I enjoyed the art, I focused most of my photography on the buildings and the character oozing from each. I only made it to the Northern Warehouse, Jax Building, 262 Studios, and a handful of others. With 24 locations, one could easily have spent all three days of the crawl immersed in art (and wine and cake and crackers and chocolate and other treats). 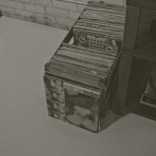 ‘Twas a marvelous night for a moondance, actually 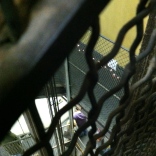 American flag made out of mousetraps, which I’m sure will rile up some folks

Banksy-like fly in the stairwell

I had a ball at the Twin Cities Marathon, running up and down Summit Avenue, cheering on friends and strangers, and texting my friend Laura, who provided updates on friends’ locations as she and her husband scanned the course on bike starting on the Minneapolis side. All the runners looked great, each to be admired. I was beaming all morning, especially for three friends who made the race look effortless. And to top it off, I made a few dog pals as well.

Helicopter over St. Thomas, signaling the arrival of elite runners 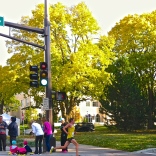 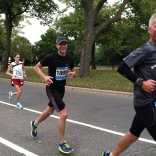 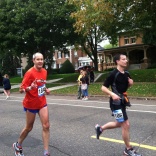 Friends who live in London returned home to Minnesota to visit family and celebrate the first birthday of their daughter, Estella. I met her for the first time today. I’ve been waiting patiently to become acquainted with this magnificent creature. She’s as adorable and angelic as a child can possibly be. But I did get a little jealous watching her open gifts — colorful musical instruments and Fisher-Price toys and books and cute outfits. Oh, to be one again. 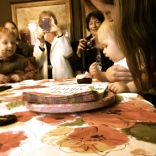 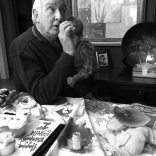 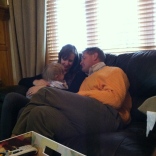 Few people can make me laugh like my brother. Just listening to him chortle sets me to chuckling, even when what he’s laughing at isn’t funny. And his sense of humor is flawless. He has one of those quick-witted minds we all yearn for, able in a ridiculous situation to instantly pull the best response from the deep recesses of his mind and slay us with it. I grow weak from laughing at his one-liners.

Embarrassing shot of both of us

Today’s his birthday. Dave’s a gem of a guy. Sweet and handsome and sensitive. He doesn’t ask for much, but he deserves all that is good in the world.

He was a wise tot, catching on at an early age (pre-Kindergarten) that a pink ear canal = healthy. He dealt with constant ear infections, which often meant a trip to the clinic, culminating in the inevitable Penicillin shot. Growing weary of this, he got his hands on a pink or flesh-colored crayon, secretly stuck it in his ear, moved it around, and surprisingly made it look healthy enough to avoid the hypodermic. Mom is baffled to this day how he got away with it, and we’re all left to wonder how a doctor can’t see that one’s ear canal has scribbles in it. 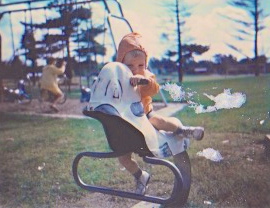 As children, we loved our stuffed animals and puppets and would perform skits for our parents using songs from their records to set the scene (“Bohemian Rhapsody” and “Uncle Albert/Admiral Halsey” were two favorites). We also created characters with our hands, like sock puppets without the socks. I remember the vampire, bunny rabbit, alien, Mr. Crabtree, burnt-out dude. We fought like ninjas at times, but we also had endless fun together.

He was also entrepreneurial. At 16 he started a newsletter called “The B-Side Report” where he reviewed the B-sides of 45s. I can’t remember how much he charged for a subscription, but people from all over the country and world signed up. This was before personal computers and the Internet, so I’m sure it took some work to promote it and write it regularly.

Dave’s smart. National Merit Scholar smart. From math to writing, he excelled at all subjects, often coming home with a 4.00 report card. Also a talented musician, Dave hasn’t aspired to fame and fortune. The ideal for him would be to record a couple albums, live quietly in Duluth among the hip musicians, and build a recording studio in the basement. After years of working on a CD, he’s finally getting close to finishing, with plans to release his first single on vinyl.

I offered to be his manager. He readily refused.

And I’m sure he’s appalled that I’m writing this post dedicated to him. He’s a private guy, but I can’t help it. Just look at that adorable face:

You are currently browsing entries tagged with birthday at The Quotidian Diary.